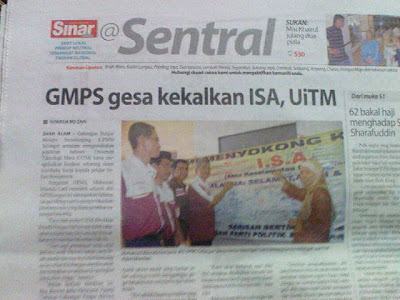 Islam in Malaysia is suppressing humanity, dignity and desire of a normal human being.

Islam in Malaysia is causing trouble to non-Muslims who goes about their everyday life to do what any other normal human being on earth are doing.

Islam in Malaysia does not respect traffic law when Muslims can park their cars all over the road and causes inconvenience to everybody.

Islam in Malaysia does not contribute to the progress of the malay race and any other race in Malaysia.

Islam felts threaten in Malaysia, when nobody actually gives a damn about them.

We all now know that Umno is a racist party in the mold of the apartheid regime of South Africa in the last century, and also practices a big part of Hitler politics (master race).

These are the salient aspects of Umno politics.

Without these racist politics, where else is the strength of Umno! How can they win elections if they don't show and shout racist and discriminatory remarks to their voters and audiences?

· The Malaysia Constitution has been amended some 690 times. The USA has been in existence for more than 200 years and their constitution was only amended 27 times.

· Because of the overwhelming power available to the executive, the judiciary has been corrupted and emasculated, the legislature has been reduced to a rubber stamp, the power of the Agung has been clipped.

· The legal system is a sad joke, serving only further the desires of the ruling group.

Who wants to stay home and serve here where meritocracy gives way to racial preference? I am a two-time graduate in University Malaya (masters and bachelors degree) and I used to hope that my children could enter a local university someday.

But with sliding university ranking and invisible barriers to keep non-malay students away, I have changed my mind. If I have the opportunity and money avails itself, I will send my children to overseas universities and ask them to emigrate there. We can rot and die here, but not the children.

This brain drain is not a problem to Umno at all. In fact, Umno is happy to see more and more of our talents leaving. Their power base will then be more secure.

All this started with Dr Mahathir. He believed that a half competent malay was better than a fully competent non-malay to serve the nation. This is clearly reflected in the progressive exclusion of non-malays from teaching profession academia, public service and other areas in the public sector as well GLCs since the early 1980s.

During Dr Mahathir's ethnic cleansing of the Malaysia public service, thousands of qualified non-malays left the country for Singapore, Australia, New Zealand, etc. Such departure was view positively by Dr Mahathir - it meant that there were more positions available for malays. That short-term thinking has had dire consequences.

During the regional economic boom of 1990s, Malaysia prospered. There was plenty of money. Incompetence and corruption did not matter - a failure could always be rectified through bailout; high costs (e.g. Proton) could always be neutralised through subsidies (for export) or higher prices (for local consumption).

The scenario today is different. Competition is stiff. Newcomers such as Vietnam are breathing down our neck. Giants (India and China) have awakened and are marching unimpeded.

Malaysia needs to exploit all its resources to meet the global challenge. Ignoring 40% of its most valuable resource (e.g. human capital - Indians, Chinese and East Malaysians) is no way to meet the challenge.

Badawi needs to put in place a policy for exploiting the most valuable resource Malaysia has - its people, including the Indians, Chinese and others. Otherwise, this resource will move away to the competitors of Malaysia.

Majority of the non-malays work in multinational companies. With the rate our government and GLCs pissing off these MNCs! These MNCs are moving out of Malaysia.

Get real! Why majority of the non-malays don't work inside GLCs? What do you think they would do when these MNCs are gone? Work in GLCs or emigrate outside Malaysia?

Some of my friends are always skeptical of Singapore.

Of course, Singapore intention is to protect their own interests (isn't what a government is for) - talented people are very mobile nowadays. Singapore also encounters brain drain to the West (US, EU, Australia), so they need new talents to come in.

They prefer Malaysians, as there are cultural ties - easy to adapt to the environment (multiracialism, language, weather, etc), like their Mr Everest climbers.

But they also welcome white mans, Thais, Indians, and Hong Kong Chinese too etc. Just take a MRT ride or go to the housing estate - you see many foreigners (not the illegal immigrant type).

We have our own national interests and should protect it, but we have more outflow of talent than inflow. Just see how we treat the economist who had a different method of calculating the bumi ratio of the economy - how to attract talent?

Some of my Malaysian friends have been offered citizenship and a few have accepted……….so those talents not going back to Malaysia.

Singapore is following US policy, US still attracted the best brains from all over the world regardless of color, check out the composition of employment in term of nationality in Silicon Valley and Nasa, you will know why it succeed, America is land of immigrants.

Umno policy is that if Umno cannot have it no other Malaysian should have it. Umno prefers a Mat Salleh (because that is a temporary situation) to have it rather than any other non-Umno Malaysian to have it.

I have been advising my relatives and friends for a long time since years ago - to encourage their children to apply for a Singapore scholarship to attend a university in Singapore even it that means she/he has to serve Singapore for 10 years.

At least, that will provide him for the future. So what is 10 years! He is free to utilise his talent as he pleases after that 10 years. I have 3 nephews who got Singapore scholarships, then served the Singapore government and are now working and being successful in Hong Kong and America.

They are heads of multinational companies. They will never be allowed to succeed in Malaysia because there is identification of race with jobs. All jobs even slightly connected with the Umno government must have malay employees. That is the new NEP.

Dear Malaysians, I don't understand why the brains should not leave this country. The malays are definitely feel threaten by these brains, so we rather let them leave the country.

Malaysia pays peanuts and racially biased! That is why! Simple as that! Go to England, Australia and even the US hospitals and take a count of how many Malaysian born doctors are there, good doctors, man!

I traveled the world over and have lived in UK, Australia and the US. I have talked and met to these doctors. They not being unpatriotic, it is the Malaysia that is not doing the right thing!

Ex-Malaysians in exiles like myself will support this feasible plan. I am sure millions of overseas and mainland Chinese and Indians are excited about my suggestion.

When all the Muslim brothers from Uganda, South Africa, Sri Lanka, Pakistan, Nigeria, Indonesia etc etc, become bumis and enjoy the handout from NEP, there will be the day when the malays realize that they are being marginalize by its own Umno policy.

You can start counting the increasing numbers of Mamak in politics!

In Malaysia, we Malaysian Chinese just need to compete with fellow Malaysians only (where mostly lazy people). Easy to become rich - as we are governed by stupid and lazy people.

We can easily own several houses, luxury condos, own a bungalow at good location, as own and drive luxury cars in Malaysia.

In Singapore, not so easy, we have to compete with Singapore Chinese, Hong Kong Chinese, China Chinese and Taiwan Chinese. Not easy to become rich as Singapore government too smart.

Malaysia will continue to lose its talents not only to Singapore, and other countries but the Umno malays don't give a damn. Their thinking is so long as the malays benefit, the country can go to the pigs and dogs.

They hold the entrenched view that it is better for Malaysia to be another Zimbabwe or Nepal if being in the ranks of Singapore and Japan means malays losing out to the others.

Lim Keng Yaik said that Singapore was a small country, so it was easily to govern. In fact, it is not so. Because of its size, it lacks most of the factors of production that we learn in economics.

Land is scarce, and its domestic market is small. However, it recognises that what it has is its labours. No wonder that it is wooing all the brains from Malaysia, since Malaysia does not appreciate them.

Instead, Malaysia seems to be attracting the top criminals as shown by the sharp increase in crime rate. Malaysia with its oil, tin, rubber, oil palm etc, will forever not be able to beat a small country like Singapore because of its incompetent leaders and their cronies who are only interested in their own pockets.

Before the NEP, UM was one of the top universities in the world. After the NEP, it has become trash because it rejects the best minds. The only pro of NEP is if you are in Umno or a friend of theirs.

All the Singaporeans I have met were very nice to me and treat me like one of theirs. We are the same people and I am always in favour of reunification with Singapore.

When will be the good day the Orang Asli come forward to utter their rightful word - "you all go back to your land of origin and leave us alone". Then malays, Indians and Chinese etc, can all pack and leave Malaysia for good.

I have the same thoughts. The Islamic peoples, especially the malays, think they are somehow superior because they don't eat pork.

Maybe as suggested, the malays should copy the Chinese and start eating pork to improve themselves overall. Obviously, not eating pork hasn't helped them to advance.