KUALA LUMPUR (Harakahdaily) - How powerful is now the prized nu 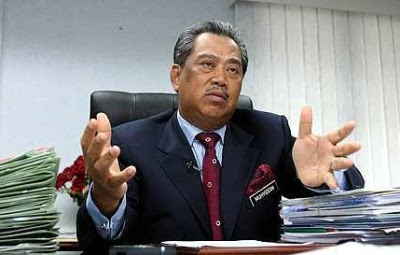 mber two position in the government is the question on everybody's lips after a statement from the deputy prime minister saying he had no power to take action against racist teachers.

Deputy prime minister, Education minister and UMNO deputy president, Muhyiddin Yassin, shocked Malaysian public yesterday when he told the press that he was powerless against two school principals who had allegedly made racial slurs, saying he could not make a decision on their cases in spite of calls for the government to show its commitment to 1Malaysia.

“The minister cannot make a decision (on this). So cases that involve certain matters, including these principals who have high (pay) grades... If I am not wrong, their grades are between 48 and 52, so this has to be decided on by a disciplinary board under the (purview of the) PSD’s director-general,” he explained.

Siti Inshah Mansor, the principal of SMK Tunku Abdul Rahman Putra, had allegedly told students during an assembly that the Chinese could return to China while the Indians resembled “dogs” with their prayer strings. Another principal, Aznan Ungku Ismail of SMK Bukit Selambau in Sungai Petani, allegedly uttered racist remarks to his non-Malay students.

Penang chief minister Lim Guan Eng, himself often being accused 'racist' by UMNO, hit out at Muhyiddin for treating the public as "dumb audience" by issuing such a statement.

“DPM says no power to act against racist principals in Kedah and Johor. Does DPM think Malaysians dumb?" asked Lim, and further questioned if the Education minister had no power to act in such cases.


Subang Jaya state representative Hannah Yeoh was more sarcastic, saying that his remark showed that Barisan Nasional leaders had a problem of "thinking" due to Malaysia's education system which she claimed did not teach "students how to think".

“I’ll give you an example… BN tells Selangor government ‘You are government of the day, just do your job’ - yet they quietly accept the Federal Government’s No.2 Man's excuse of being powerless,” she said on her Twitter.

“Is it outside Muhyiddin’s power to condemn school principals for racist slurs against students in schools which are totally against the spirit and intent of 1Malaysia policy, making insulting, offensive and insensitive statements against the race and religion of students in a plural society?

"If not, why the thunderous silence by Muhyiddin over the case of school principals making racist slurs against students in schools for more than six weeks?” he asked.

So, DPM should resign right away. We don't need a powerless minister around.